While the Vincent van Gogh immersive art exhibit may be closing on March 6, soon to be replaced by a similar Frida Kahlo immersive experience, it’s clear that such projected art spectacles are here to stay. Downtown, an immersive 3D NFT art exhibit’s getting attendance at The Mint, and a Gustav Klimt exhibit scheduled to tour Boston, Phoenix and Toronto may be on its way.

Meanwhile, at the San Francisco Armory, Imagine Picasso, immersive installation, is underway. While its creators are sincere in their devotion to the works of Pablo Picasso, including the endorsement of his grandson (who attended the press briefing from France via Zoom), it still leaves the question as to whether these spectacles actually bring viewers closer to the art or just provide a computer-assisted form of sometimes interesting entertainment.

Pablo Picasso (1881-1973) a singular master of Modern 20th-century art, was born in Spain, and spent most of his life in France. His major works are recognizable to even the least devoted of visual art fans, and have been sold and re-sold at record prices.

At the February 8 press opening for the Imagine Picasso installation, the French creators offered sincere thoughts on why they decided to create these installations.

Like the van Gogh exhibit (reviewed in May 2021), Imagine Picasso offers some visual dazzle with nicely matched audio scores for each phase of Picasso’s styles (traditional, Blue Period, Cubist, African-influenced, even a section focusing on his antiwar masterpiece, “Guernica”). 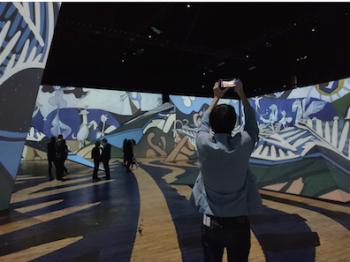 ‘Imagine Picasso’ at The Armory

But are such exhibits really ‘immersive,’ or do they merely provide an opportunity for selfies (of which I’m also guilty)? While the front room offered informative animated clips in a historical context for Picasso’s work, and a panel of miniature reproductions of Picasso’s work as well as text panels showed the extent of his experience in multiple genres of visual art, the main room felt spacious, certainly , but a bit shy of depth.

Along with huge wall set pieces that displayed 200 of Picasso’s works through his career, a few large center sculptural pieces (frames with stretched fabric) have been installed, each of them sharply angular like icebergs, perhaps skate park ramps or set pieces from a dramatization of the animated film The Point.

And what is the point of such installations? The angled center structures, according to its designers, resolves the simple ‘verticality’ of a traditional exhibit.

“This was really kind of a problem for us,” said Mauger, “because we didn’t know how to replace this verticality with something else, so we decided to use angles, and that’s such a new way to understand the master’s work. “

Mauger also stated that this is not an art exhibited exactly but more a “performance interpretation” of Picasso’s art, complete with a gift shop, of course. The problem is that for the projected works, we mostly see only a partial view; intentional, according to the design team.

Passionate, I cannot help but recall a marvelous day in Paris in 1995 when I happened upon the Picasso Art Museum. Along with outdoor sculptures that one could touch, the palpable excitement of seeing an original artwork by a master, some strokes of paint thick enough to draw shadows, cannot be matched by slideshow of slightly animated spectacles. The fragility of a painting on canvas is missing.

Yet Mauger and her team estimate that Picasso himself would have enjoyed such an exhibit. He was an innovator, even in his later years delving into multimedia, puppet shows and films.

Frida Kahlo, however, would probably be dismayed by the over-commodification of her work even before such immersive shows. Reproductions of her art now verge on banal kitsch.

And I can’t help but recall a scene in the rebooted Doctor Who (season 5, episode 10) where Vincent van Gogh (played by Tony Curran) is catapulted through time to see his work finally getting deserved exhibitions and devoted fans, leaving the destitute artist in joyful tears. But how would he feel about animated crows flying above him?

Will viewers be encouraged to attend actual art museums and galleries to see art in person after having participated in such installations? That remains to be seen.

At each of these events, face masks and proof of vaccination are mandatory.